All My Updates Are Belong To You!


Since it's been a while since my last post, I'll explain with photo collages... ;)

I received a commission request from my friend Danielle for one of her original characters, Aurelie. She wanted a semi-articulated ragdoll with yarn hair, button eyes, rainbow hair extensions, and a frilly dress. *cringe* She wanted this in response to seeing my "Asuna" fabric doll, a faceless one of a kind doll I'd made ages ago and then stuffed in a tub. Sooo I did a concept sketch and accepted her order. I drew a freehanded, original pattern for the doll and started sewing. She ended up kinda cute...

Not to be discouraged by silly things like a full-time job or overworking my pre-carpal-tunnel-syndrome hands, I decided that the other fabric khaki dolls needed work, too... Asuna got a fabric paint face that's really cute. The skinny boy doll became Jareth with his half-finished face. (I realized that fabric paint + brushes is a functional combination. Duh.) 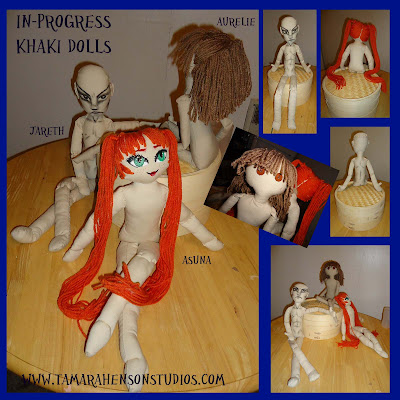 After I'd made that progress, I finished Aurelie's face embroidery and rainbow extensions. Then she sat for a day or two while I started another few projects... I dragged out the Lil Cutesies Berenguer dolls and started reborning the first of six Myth-Babies: Reborn dolls. I had a plain baby head sitting around forever with just elf-ears and sculpted hair removed. So of course, I didn't finish that one. Since the base dolls are so dang cute, this is what happened... He's still not finished, but soon...

There is a mermaid in the works, the already-started elf, plus one Myth-Babies doll straight outta Irish mythology. Brandon, my husband, doesn't like this baby. He wants to smack it in the head with a hammer. I don't really blame him, considering. You'll see why when she's finished. ;)

Then I finally finished Aurelie, who ended up being about 90% hand-sewn in the end. Her dress was indeed frilly and cute. Her new mommy absolutely LOVES her. I even made faux leather booties for her. She has an almost Alice in Wonderland feel to her. Handing her over to Danielle was actually difficult! The time that goes into these new babies gets you attached pretty easily. Even if they are full o' frills!

And then, with all those Myth-Babies: Reborn hanging out in progress, I had to get crackin' on the MB:BJD sculpt again. She got some refinement. Mostly, she got a healthy couple or three coats of primer and a high-polish from a scrap of satin. My hand hurts, but she's lookin' sharp! (In a stumpy, limbless kinda way...) My next big step on this one is finishing the limbs. My other next step is the reason why I primed her... making molds from the parts! She'll be fully junk-cast in resin by the end of the month! :D


So, other than spending time on EVERY project ever, I have worked a little on my Volume 2 rough draft. I think I needed a focus break so that the story could swim around in my head for a while before I jump back in. And these are the things I'm doing in the meantime. There, a long, thorough update. Now I'm finished until I get some Myth-Babies made!

P.S. On a perturbing note: The world I created that I call the Dark Planet just got an official name a few months ago, a name that didn't exist on the Internet when I Google-whacked it. :) It was kinda generic: Centaria. But some other author has already used the name in his novels, and various D&D nerds (I say lovingly) are using the name for their worlds as well. I do hate backpedaling on a name, but here I go again. At least the world doesn't show up until Volume 3! ;)
Posted by Tamara Henson at 12:58 AM

Labels: About the Novels, BJD

Tamara Henson
Barbourville, KY, United States
I'm an artist, novelist of sci-fi fantasy stories, and avid dreamer. Find out more about the world of Unata and my other work on my website: http://www.tamarahensonstudios.com